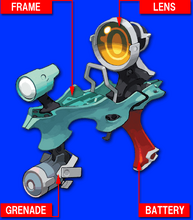 Batteries are an integral part of the Gun del Sol. Batteries store sunlight that the Gun del Sol uses as a power source (in-game sunlight, not the actual sunlight that hits the solar sensor). Batteries only appear in Boktai: The Sun is in Your Hand; later games simply give characters an energy meter for use with any type of weapon, effectively replacing batteries.

Each time the Gun del Sol is used, energy is lost from the battery equipped. An equipped battery slowly recharges when exposed to sunlight and can be recharged faster if the A button is held. Batteries can also be recharged directly from a Solar Station. Each battery has a different capacity, with the larger batteries appearing later in the game. The first available battery is able to store a single "sol" of solar energy; the capacity of all other batteries, as well as the Solar Bank and Solar Station, are counted in sols.

Under most circumstances it would only be logical to equip the largest battery available. However, no batteries are discarded during the game so smaller batteries still serve as effective backups: once the current battery is drained, players can switch to the next largest battery and resume their game without taking the time to recharge. This is an effective strategy during combat or when little sunlight is available, but it could serve as a double-edged sword if players forget to recharge each battery independently.