This article is a stub. You can help by expanding it.
Boktai: The Sun is in Your Hand, known in Japan as Bokura no Taiyō: Solar Action RPG (ボクらの太陽太陽アクションRPG), is a Game Boy Advance game released in 2003 by Konami produced by Hideo Kojima. The game's cartridge contains a Solar Sensor that measures the amount of sunlight in the area, which affects the gameplay. The player controls Django, a vampire hunter who hopes to use his Gun Del Sol to avenge his father's death. 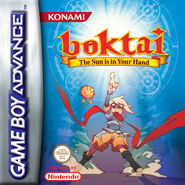 Official visual
Add a photo to this gallery

Retrieved from "https://boktai.fandom.com/wiki/Boktai:_The_Sun_is_in_Your_Hand?oldid=7880"
Community content is available under CC-BY-SA unless otherwise noted.