Boktai 3: Sabata's Counterattack
The Dark Boy and the Moon Beauty, Sabata (サバタ) is the older twin brother of the Boktai series' protagonist, Django. He is the complete opposite of Django in every possible way. While Django is Sol aligned, Sabata is Dark aligned. However, even though he is associated with the dark, he is not a villain. He has on numerous occasions saved Django's life. Since his body is imbued with the power of Dark Matter, he is susceptible to sunlight, and being in it for long periods of time can pose a risk to his life.

Sabata is a playable character in some events of Boktai 2: Solar Boy Django and in the prologue of Boktai 3: Sabata's Counterattack.

Being Django's twin brother, Sabata looks a lot like him, but with a slightly more feminine appearance. He also seems to be skinnier than his brother, having what looks like an hourglass silhouette. He is a young boy with red eyes and purple hair that is partially slicked back into a swooping cone-like shape, with two bangs hanging on the side of the headband. He has a smaller bang under the bandana, right between his eyes, and two larger ones that hang over the side of his face and are held up by his headband, which resembles a black mask bearing two large square shaped eyes outlined in red. He also has two scars on his face: one on the left cheek, the other is hidden under the headband and is located on the left eyebrow. His signature piece of clothing is his Moonlight Scarf, a memento from his mother, which he wears on his neck. His outfit consists of a black armor like protector on his torso with puffy dark grey sleeves that have purple folds and matching dark grey baggy shorts. His shoes differ from game to game: in the first game he wears plain dark grey knee-high boots with black folds and wedges, while in the other two he has a pair of black oversized boots with grey edges, metallic tips and three spikes at the back of each calf.

When Sabata was still an infant, the Queen of Immortals, Hel, kidnapped him and infused his body with Dark Matter. He was trained to be a ruthless killer, specialized in taking down the Solar Boy. In his teens, Sabata kidnapped his mother, Mani, in the place of the Count (who was wounded by Ringo and unable to accomplish his mission) and imprisoned her in the Queen's castle without knowing that she was the one who gave birth to him. One day, while walking through the corridors with a wounded leg, he passed by Mani's cell. She bound his wound with her Moonlight Scarf and he then knew that Mani was his true mother.

After Django defeats the Count of Groundsoaking Blood, he is confronted by Sabata who tells him to turn back and to stop pursuing the Immortals. Django and Otenko refuse and Sabata leaves with his Dark Warp technique. Django and Sabata later meet up inside of the volcanic Firetop Mountain and he uses the power of Dark Matter to resurrect the giant iron golem Muspell to fight Django. When Django makes it to the Permafrost he summons the Snow White Wolf Garmr with Dark Matter as well. When Django reaches Sol City, Sabata confronts Django and they duel atop a floating platform. Sabata humiliates Django by dodging every single one of his attacks while laughing at him. Sabata Dark Warps off of the platform after telling Django that to save Moon Beauty he must defeat Carmilla, the Crying Banshee. Django and Sabata duel again in Dark Castle, and Sabata is defeated this time, and he explains to Django about Mani, the guardians Muspell and Garmr, and about Carmilla. Sabata, having recovered from his battle with Django saves his life by knocking him out of the way of a skeletal hand of Hel's headed straight for his chest. The two brothers then team up to defeat Hel.

After the battle, Sabata leaves on a quest to try and restore Carmilla's soul. He fights against a Vampire-turned Red Ringo in the desert and gets badly injured. Later on he meets up with his brother again while recovering from his wound. While in a hidden chamber of the Remains, Sabata saves Django by knocking him out of the way of a vampire's bite. Sabata and his brother team up to defeat the vampire but Django gets bitten in the process. Sabata places Django in a coffin and drags him to the Pile Driver, where he purifies his brother, but also collapses from being exposed to sunlight for too long. After Sabata recovers, he and Django confront Black Dainn and Blue Dvallin, the Sea ruling immortal. Django fights Dvallin while Sabata chases after Dainn. Sabata loses sight of Black Dainn and goes to the entrance of Spiral Tower to wait for Django. Sabata and Django climb both sides of Spiral Tower and meet up at the top in the center, where they confront and defeat Black Dainn. At the foot of Spiral Tower, Sabata realizes that he is the new Moon Beauty and uses his Lunar powers to open the door to the Undead Zone for Django.

In Boktai 3: Sabata's Counterattack, Sabata is captured by the Immortal Ratatosk and forced to act as the Immortal's puppet in awakening Vanargand, the beast of destruction. After fighting against Django in the White Forest, Django attempts to rescue Sabata by removing all Dark Matter from his body, but fails to save him, and Sabata fuses with Vanargand. However, Django was able to defeat Vanargand. Depending of the player's actions, Sabata dies and stays with Carmilla inside Vanargand, or survives and leave the Moon with Django.

In the Boktai series, Sabata has different themes, such as battle or a type of encounter. 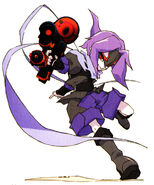 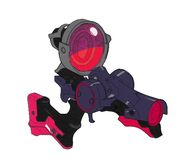 Concept art of Django and Sabata for Boktai 1

Wallpaper of Sabata From Boktai 2

Wallpaper of Sabata From Boktai 2 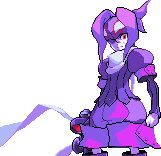 The fight will eventually end after some time.