Durathror (ドゥラスロール) - also known as Red Durathror - is the Earth-Ruling Immortal, youngest of the three Immortal sisters and a member of the Shadow Clan of Immortals. Durathror is the source of the Darkness Tree that attempted to strangle San Miguel with its roots. She was sealed in the Dark City until released by Black Dainn. When Django went to Dark City to stop the Darkness Tree, he fought against Durathror and defeated her.

Durathror has a half-human, half-plant form. She can enter the ground and creates plants to aid her, like Root of Darkness and buds. She attacks with Pollen, Thorns, Giant Thorns and Thorn Balls.

speculated that her element became Sol because she absorbed the Solar Tree's power.

Durathror and her siblings are named after Dáinn, Dvalinn, Duneyrr and Duraþrór, the four stags of Yggdrasill, who live in its branches, eating its leaves. 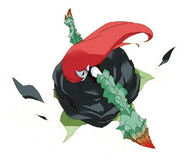 Official Artwork of Durathror
Add a photo to this gallery
Retrieved from "https://boktai.fandom.com/wiki/Durathror?oldid=7677"
Community content is available under CC-BY-SA unless otherwise noted.