The Gun del Sol (ガン・デル・ソル) is Django's trusted Solar Gun in Boktai: The Sun is in Your Hand, given to him by his father Ringo. The Gun del Sol's main attack is to shoot a ball of Solar Energy, rechargeable by sitting in sunlight, or by charging manually. If Django successfully stuns an enemy at night, lunar bugs will appear. The gun can be customized with different lenses (for different elemental attacks), frames (for a different attack type, such as a short-range blast, a sword-like beam, an attack where Django spins around, a musical shot to call enemies, a shot that bounces on walls, etc.), grenades (can fly over walls to hurt someone on the other side, Rising Sun gives 4 Bars of Sunlight for 30 seconds, etc.), and batteries (to give another extra tank of energy, allow Django to use energy straight from the Solar Station, etc.) The Gun del Sol is Django's most powerful weapon, but does have its downsides:

At the start of the game, it works much like it has a Knight/Fighter Frame equipped, with extremely low Energy cost and a dramatic damage bust. It is lost early on due Django meeting the Vampire.

Once Dainn is defeat, the ashes of Ringo leave behind a damaged Gun del Sol, talking to Smith will have in quickly fixed up, but due the little time he had to repair it (Due to the Doomsday Event), the Gun is severely lowered in quality, It has the highest Energy cost in the game (50 per shot), this cost can't be reduced by the Protector Magic Robe and it cant equip Frames or Lenses (or be enchanted by Moonlight Magic). However It is the strongest weapon even with all your other weapons up to 99 with a brutal 150 Damage by default, so using it too used often will run Django out of energy fast. in exchange for this cost, Holding B charges Solar shot, the further is hold, the more damage it deals, it also pushes Django further, has 2 charge levels.

This later feature was moved to the Dragon Frame.

Plus, it can only shoot Solar Element shots, so it causes 1 damage per shot to Django when in his Dark Django vampire form, and losing HP over time if charging.

It has one last possible upgrade if Gun Skill Points has been maxed at 99, talking to Sabata will give Django the Joker Emblem reducing Gun Del Sol's charge time from 2.5 seconds to 1.5 seconds.

Django has the Gun del Sol and swords, so it can still be used as the default weapon. A strong point of the Gun del Sol is that most of its attacks are long-ranged, so it can kill enemies from far off and are useful in missions that the player can't get noticed to succeed.

Lenses primarily affect the element of the Gun del Sol's shots. They can be swapped by holding Select and tapping B.

Frames affect the style of the gun's shots, and by extension, how much energy it uses. They can be swapped by holding Select and tapping R. Up to 8 frames can be put up for quick selection at one time. 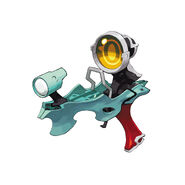 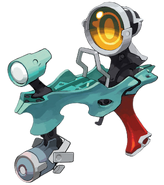 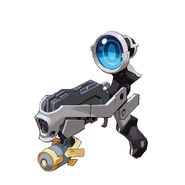 The Gun del Sol with the Frost I Lens,the Quad Battery, the Swordmaster Frame, and the Rising Sun Grenade 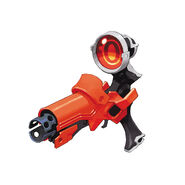