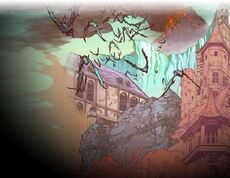 Istrakan is the dark city that the Immortals have inhabited

since time immemorial. Boktai 1 is based in Istrakan, referenced to in Boktai 2, and a playable area in Lunar Knights. In the first three Boktai games it is said to be a place of evil where the Immortals rule their undead armies.

During the course of the first three games, it is shown that Istrakan is primarily a heavily deteriorated and ruined city inhabited by various undead underlings and Immortals. However, in the time that Lunar Knights takes place it is revealed to be a city entirely taken over by the Immortals and rebuilt to be a formidable area.

Retrieved from "https://boktai.fandom.com/wiki/Istrakan?oldid=7823"
Community content is available under CC-BY-SA unless otherwise noted.