This page lists the locations of the Boktai games as well as the semi-continuation, Lunar Knights.

Istrakan, the City of DeathEdit

A dark city ruled by the Immortals. Boktai: The Sun is in Your Hand takes place here.

The first dungeon Django explores, where the Count is supposedly recovering from wounds inflicted on him in a battle against Django's father. It turns out that the coffin Django finds is only a decoy left by the Count, who has recovered while Django and Otenko were distracted by the fake.

A large manor belonging to the Count of Groundsoaking Blood. Here, Django finds the true Count, who had kidnapped the Earthly Maiden, Lita, to be a sacrifice in his mysterious plan.

A frozen dungeon in the middle of the sea. Django and Otenko must cross ice floes to reach it. It is protected by the Dark Guardian Garmr.

A volcano filled with fire and lava. It is protected by the Dark Guardian Muspell, who is one of the original golems, the remains of the iron giants who mastered fire.

A floating city, which can only be reached with a Warp Magic Square powered up with the Solflower, found in the Delusion Forest. Sol City was the ancient capital, and was built by the Solar Children, but has been completely deserted. Carmilla waits for Django and Otenko at the top of a tower downtown.But no sun a Dark Clouds  the Sol City to Dark City

A large castle in space which is being propelled to the Moon with the combined power of the Count, Carmilla, Garmr, and Muspell, all of whom Hel sacrificed as part of her plan.

The shrine of the life of the world, it was captured along with Lita by the Immortals and taken to Istrakan. The Undeadening has reduced it to a terrible state, but it recovers over time. Django can plant Solar Fruits in its roots and they will grow.

A place where Django can borrow solar energy. If he does not repay what he borrowed after a certain amount of time, he is punished.

A bank where Django can deposit and withdraw solar energy. Over time, deposited solar energy will gain interest.

A very tall tower where the legendary Guardian of the Moon once battled. It is said that his sword lies at the top; many knights died trying to get it.

San Miguel, the City of the SunEdit

Django's hometown, which was turned into a city of death by the Undeadening. Boktai 2: Solar Boy Django takes place here. 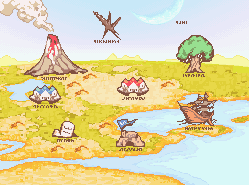 The first town you can reach. A small town.

The town bar, warm and inviting.

A shop run by an old-fashioned canid shopkeeper where you can buy and sell items, accessories, and junk parts.

The local Solar Bank, Acuna chapter, formerly Dark Loans, according to the cashier, Laura, who is lively and chipper despite being an android.

Margrave Rymer's former home, left vacant and swarming with monsters after his death/purification.

The outside section of the property. Has lots of fancy-looking gates and such.

The inside of the mansion itself, covered with lush carpets and wood floors as well as lots and lots of monster guards.

After the city fell into ruin, it sank into the ground and now much of it is covered in lava. Very hot. Rumor (or rather fact, as you may late find out) states that there is a legendary weapon there, the Dark Lance Jormungandr.

The home of Professor Sheridan, who can level up your weapons and change the climate by hacking into the paraSOL.

A town that is still holding its own against the infestation of vampires. ...Well mostly, anyway.

The residential portion of the city. Also the larger part of the city's area.

A very extensive sewer system that is said to stretch from Old Culiacan to under the Santa Cecilia Train Station.

Under the sewers: Sealed Area, aka IstrakanEdit

After the city fell into ruin, it sank into the ground and now there is a lot of ice on it, making it hard to get around without slipping. Very cold. Rumor (or rather fact, as you may late find out) states that there is a legendary weapon there, the three-bladed Dark Scythe Hel.

The local bar/inn, where you can talk or stay the night.

Also exactly as it seems. There is a wandering canid shopkeeper who rides the train back and forth between the station and the tower laboratory.

The hideout of the Guild, a band of gunslingers who continually fight against the darkness and vampires.

A huge gate which can only be opened by all four terrennials at once. Past it is the cursed city of New Culiacan.

A cursed city where the vampire's brides (humans who provide blood to vampires) live. You might arouse suspicion if you don't wear that bottlecap of yours, though.

The stronghold of the Duke, the vampire Dumas.

One of the twin dark towers, both of which must be reached at the same time.

The other of the twin dark towers.

The true form of the paraSOL, a machine which consumes a planet and makes it suitable for Immortals to live on it. More specifically, Polidori.

Retrieved from "https://boktai.fandom.com/wiki/Locations?oldid=4831"
Community content is available under CC-BY-SA unless otherwise noted.