The beginning of the Boktai crossover in Mega Man Battle Network 4 starts at Electopia's first theme park, Castillo, where they have rides based off of popular movies and comic books, one of which is Solar Boy Django, which is a story about a vampire hunter named Django who goes off on a journey to hunt Vampires with the Solar Gun, Gun Del Sol. Along the way he meets a sun spirit named Otenko who senses evil coming from the east and together they head toward this evil force, once they reach the Eastern town they meet the Super-Vampire Dracky where they found that garlic and the cross did not effect him, then they head into his mansion where Django and Dracky have their fight to the death. MegaMan fights against ShadeMan inside Dracky's robot.

In a sidequest, the real Django and Otenko can be seen in the Undernet, where they use the Pile Driver to purify ShadeMan. 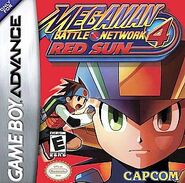 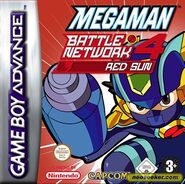 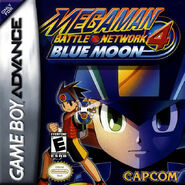 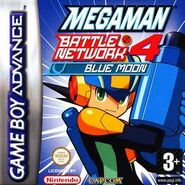 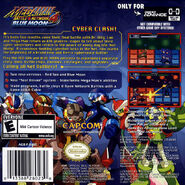 Blue Moon Back Cover
Add a photo to this gallery
Retrieved from "https://boktai.fandom.com/wiki/Mega_Man_Battle_Network_4?oldid=3584"
Community content is available under CC-BY-SA unless otherwise noted.