Nidhoggr (ニーズホッグ) is an Immortal with glasses, pale blue skin and a green suit. He pilots an alligator-like battleship known as the "Nidhoggr Machine", and uses bombs as his main weapon. He is not on good terms with Hresvelgr, as it "thinks only with its stomach".

When Django went to Pirate Island to travel to the Moon, Ratatosk ordered Nidhoggr to stop him. Nidhoggr captured Trinity and attacked Django's ship with his machine. After causing great damage to the machine, Django is swallowed and fights against Nidhoggr inside the machine, defeating him and saving Trinity.

The "Nidhoggr Machine" can swim at high speed and has three types of cannons in its back that can attack with bombs and lasers. Once all the cannons are destroyed, the fight gets taken to the Nidhogger machine's head, which can spew a poisonous gas. Every now and then, while fighting the head, it will grab the side of the ship, prompting an opportunity to attack its eyes where it's most vulnerable - but it is also capable of firing a powerful electric shock to attack anyone close by.

Nidhoggr lacks physical strength, but has great intelligence and attacks using his machines. Inside the machine, he has a barrier protecting him and drop bombs to attack Django. Django has to destroy four of the objects in his room to make the barrier go down, and after a while, Nidhoggr will make a spiked iron ball spin around him and reactivate the barrier.

Níðhöggr is a dragon in Norse mythology that lived at the bottom of the Yggdrasil. Níðhöggr is the bickering adversary of the unnamed eagle, who lived on top of the tree with Veðrfölnir. 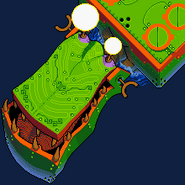 Official Wallpaper
Add a photo to this gallery
Retrieved from "https://boktai.fandom.com/wiki/Nidhoggr?oldid=8441"
Community content is available under CC-BY-SA unless otherwise noted.