San Miguel (サン・ミゲル), the City of the Sun, is Django's hometown. In Boktai 2: Solar Boy Django, the city was turned into a city of death by the Undeadening, but Django and the citizens managed to restore it to normal after the defeat of the Immortals. In Boktai 3: Sabata's Counterattack, Django has a house in the city. 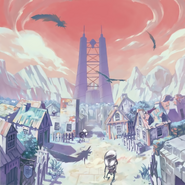 Two skeletons roam the streets of the "city of death"
Add a photo to this gallery
Retrieved from "https://boktai.fandom.com/wiki/San_Miguel?oldid=7782"
Community content is available under CC-BY-SA unless otherwise noted.