Boktai 3: Sabata's Counterattack
Django (ジャンゴ Jango) is the 'Solar Boy' and the main protagonist of the Boktai series. His hometown is the City of the Sun, San Miguel, and he wields the Gun Del Sol. He's also Sabata's younger twin brother.

Django is a young boy with dark grey eyes and sandy blonde hair that is slicked back into 3 swooping cone-like shapes. His bangs hang over the edge of his headband, which resembles a dark grey mask bearing two large almond shaped eyes outlined in red. In his later appearances, his headband is accompanied by a pair of bike goggles.

Despite being a Solar Boy, Django is fair skinned. He has a bandage on his left cheek. His signature piece of clothing is his Crimson Scarf, a memento from his father, which he wears on his neck. His outfit consists of a dark grey armor like protector on his torso with puffy grey sleeves that have tan folds and matching grey baggy shorts. His shoes differ from game to game: in the first game he wears plain grey knee-high boots with black folds and wedges, while in the other two he has a pair of black oversized boots with white edges and platforms, similar in design in both games.

Django is the "silent protagonist" type, and as such, his personality is left mainly up to the player to interpret. Though he rarely speaks in the beginning, he gradually speaks more in each installment of the series.

Django's Gun Del Sol is shown to have great sentimental value to him, as Zazie comments that he was crying not long after it was stolen from him in Boktai 2.

Boktai: The Sun is in your Hand[]

In the beginning, Django sets out to kill the Count and avenge the death of his father Ringo. However, he learns of beings known as Immortals, and of the plans of the Queen of Immortals, Hel. He sets out to purify the Immortals and stop the Queen's plan of turning the world undead with the power of the moon. Though he is able to defeat the Immortals and stop Hel's plan, Django and his brother are unable to save their mother, Mani.

He is accompanied by Master Otenko, his mentor. During his adventure, he meets the Earthly Maiden Lita, and his brother, Dark Boy Sabata.

In Boktai 2, Django is confronted with another group of Immortals, lead by Black Dainn. He learns that this group is planning to release the Eternal, Jormungandr, and destroy the world. Thanks to the help of the citizens of San Miguel, Django is able to stop the Immortals' plan, as well as rebind Jormungandr, preventing the world's destruction.

For largest portions of the game, Django loses his Gun Del Sol, the weapon having been stolen by his father, who has revived as a vampire. While without his gun, Django uses other weapons such as clubs and swords to fight the undead. In the fight against Ringo, Django gets bitten by his father and becomes part vampire after a failed purification. While in his vampire form, Django has special abilities, such as the ability to transform into a wolf. However, he is also weak to water and sunlight while in his vampire form.

During the story, Django reunites with Sabata and Lita, and also is introduced to citizens of San Miguel such as Zazie and Lady.

At the start, Django is sealed in a tomb by his brother Sabata, who is under the control of Ratatosk the Puppeteer. However, he is freed when a boy named Trinity breaks the seal of that tomb. Django soon learns that Ratatosk and a group of new Imortals is planning on using Sabata to release the Eternal, Vanargand, and rule the world. With the help of Otenko and Carmilla, Django is able to defeat the Imortals and seal Vanargand, saving the world.

During the story, Django again meets Lita and the citizens of San Miguel. However, he also encounters the Count of Groundsoaking Blood, and must purify him again.

Depending on how much the player uses Sol/Dark trans, and how they perform in the final battle against Vanargand, the player can obtain one of four endings. 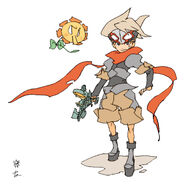 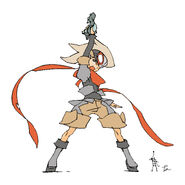 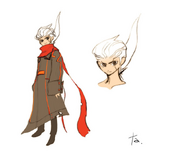 Concept art of Django with a pet white bat