Throughout Lunar Knights, after you defeat each Dark Tribe member you release the Terrenial locked inside their respective Casket Armors. They each have their own respective elements.

When the Trance (TRC) gauge is full, the player has the ability to fuse with the current Terrenial. The 4 elemental Terrenials all have a special ability that make use of the Nintendo DS' features (i.e. touch screen and microphone). Toasty and Nero, however, are slightly different.

Toasty fuses with Aaron to transform Aaron into a sol warrior. This form looks and attacks similar to Sol Django. He has 2 attacks.

Nero fuses with Lucian to become a vampiric warrior. This form looks like a demonic version of Black Django. It has blue skin, black, blue and red hair and sharp claws. It also has vampire fangs (after all, what vampire wouldn't). This form also has 2 attacks.

Finally, Duke Dumas also has a dark terrenial named Perrault. Perrault is the boss in the space fight towards the Piledriver. Perrault controls the ship Schrödinger. Perrault is later revealed to be the other half of Nero, and despite its light appearance, Perrault appears to be the evil half. Whether these 2 were once Violet's cat Nero from Boktai 2: Solar Boy Django is unknown. In the fight with Dumas, Perrault fuses with Dumas to become a very dangerous form of vampire, thirsty for blood and caring for nothing it knocks down in its way. 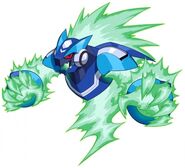 Official Wallpaper
Add a photo to this gallery

Ezra Menu Sprite
Add a photo to this gallery
Retrieved from "https://boktai.fandom.com/wiki/Terrenials?oldid=7833"
Community content is available under CC-BY-SA unless otherwise noted.