The Count of Groundsoaking Blood

The Count of Groundsoaking Blood

Boktai 3: Sabata's Counterattack
The Count of Groundsoaking Blood (大地を濡らす血の伯爵 Daichi wo Nurasu Chi no Hakushaku) is both Django's and Ringo's biggest rival, a vampire lord member of the Death Clan of Immortals. He was responsible for Ringo's death and subsequent vampirization. Although he is purified multiple times throughout the game series, he usually manages to revive himself and attack Django once more, declaring that he is Django's rival and shall rise again and again to challenge him. The Count is the lover of Hel, the queen of Immortals, though he never manages to become the king.

Before the events of the games, Black Dainn had sent the Count to spy on Hel, but the Count fell in love with her. Under the queen's orders, the Count attacked San Miguel to capture the Moon Beauty Mani to be used as a sacrifice to the queen, and fought against Ringo to turn him into a vampire for Dainn.

Boktai: The Sun is in Your Hand begins with Otenko and the new vampire hunter, Django, going to the Fog Castle to purify the Count while he's recovering from his injuries from the battle against Ringo. They succeed to purify the Count in the Pile Driver, but the real Count reveals it was only a decoy and his wounds had healed completely.

In the Bloodrust Mansion, the Count talks with Sabata about their plans. When Django entered the Count's chamber, he shows Django a woman, the Earthly Maiden Lita, that he captured to be used as a sacrifice, and doesn't consider Django a treat. However, Django defeats the Count and saves Lita. The Count reappears in the Dark Castle, where he fights against Django and is defeated again.

The Count didn't appear in Boktai 2: Solar Boy Django, but it's believed he is the one responsible for making ShadeMan.EXE appear in Django's world in the MegaMan.EXE sidequest to use ShadeMan as his new physical form to haste his resurrection.

In Boktai 3: Sabata's Counterattack, the Count revived and now works for Ratatosk. After Django escapes the Sealed Prison, the Count tells him they plan to revive Vanargand, and the only way to stop them is killing Sabata, asking Django if he can defeat his brother. Django goes after the Count and found him causing chaos in the Lifeless Town to drain energy from the habitants. When Trinity saw Django going to fight the Count, believing Django is a normal human and concluding that for a kid to challenge a Immortal means they are weaker then the ones in his time, he attacks the Count to obtain his treasures, but is knocked out by his bats. After the battle, the Count is purified in the Pile Driver, but he survived by hiding a part of his body in Trinity. When Django defeated Hresvelgr in the Ancient Giant Tree, the Count became stronger by using the tree's energy and fooling Hresvelgr. He fights against Django and almost killed him with his Blood Rain, but the Ancient Tree helped Django and he was able to turn into Sol Django, defeating the Count.

In Rockman.EXE 6, the Japanese version of MegaMan Battle Network 6, the Count appears as a optional boss in the Immortal Area. MegaMan cannot damage the Count at first, but Django intervenes. In order to face the Count, MegaMan has to help Django find Otenko, which can be found locked in the Undernet area. After finding Otenko, the Count can be damaged, and the player obtains his Battle Chip after the battle.

The Count is also the boss of the multiplayer mode Crossover Battle 2, available with a link between Rockman.EXE 6 and Shin Bokura no Taiyō, replacing ShadeMan from the previous Crossover Battle. Django and MegaMan each fight against one Count in their game, and the player win if he defeat his Count first or the other player is defeated. Players can also disturb the opponent by sending attacks or enemies to his game or heal the opponent's Count.

A vampire being a 'Count' is a stereotype of the vampire genre, originating with Count Dracula. 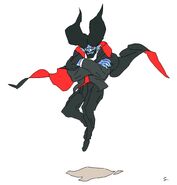 e-Reader+ card for use with Mega Man Battle Network 6
Community content is available under CC-BY-SA unless otherwise noted.
Advertisement