The Vampire Bat (ヴァンパイア バット Vu anpaia batto) is a variety of Bat introduced in Boktai 2. These bats behave like the normal bats, flying around to attack with small thrusts, although, this bat has the ability to suck HP from the player. 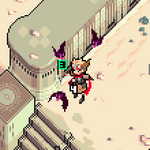 Vampire bats are used as a boss attacks in two battles, in the battle against The Count of Groundsoaking Blood and Vampire Ringo.

As much Boktai and in Boktai 3, when the Count has low life, he will divide into several bats to suck Django's blood, in order to recover his life. Also his main attack in Boktai 3, is send four bats to attack Django, these bats are weak and easy to eliminate, and they will disappears after touch a wall.

There's also a couple of bats on the windows at the boss room in boktai 3 to prevent sunlight from entering, if all of they are defeated, sunlight will enter at center of the room.

When Ringo has low life and is trapped in the black hole of Sabata, he will frees himself dividing into several bats and, bites Django and Sabata to recover his life. If Ringo recovers a lot of life or, gets a lot of damage in the attempt, he will returns to normal.

Retrieved from "https://boktai.fandom.com/wiki/Vampire_Bat?oldid=8139"
Community content is available under CC-BY-SA unless otherwise noted.