White Duneyrr (ドゥネイル) is the Sky-Ruling Immortal, middle of the three immortal sisters and a member of the Shadow Clan of Immortals. She was sealed in the Cathedral until released by Black Dainn. Although she was ordered by Black Dainn to not attack Django (off-screen), Duneyrr was too hungry from being sealed away and did so anyway. Duneyrr was easily defeated by Django because her full power had not yet returned following her hibernation.

Duneyrr can take the form of a giant white moth when necessary. In this form, she is able to attack with Phosphorus Powder, Phosphorus Powder Ball, Larva and dive bombing. But like a real moth, she is attracted by fire and can become a easy target when distracted.

Duneyrr, one of the four stags of Yggdrasill, who live in its branches, eating its leaves. 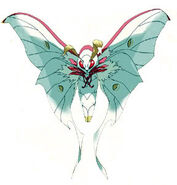 Official art of Duneyrr's moth form
Add a photo to this gallery
Retrieved from "https://boktai.fandom.com/wiki/White_Duneyrr?oldid=8281"
Community content is available under CC-BY-SA unless otherwise noted.